On this Episode of The Massimo Show Rod sits down with top Commercial Real Estate producer Anthony Provenzano to talk about his early life, his biggest wins, and his secret to success.

Anthony was an active, self-motivated kid with 2 black belts and a love for baseball when at just 14 he and his younger brother lost their father to an illness.

Orphaned and alone, Anthony Provenzano found himself living out of his car while attending high school and finding odd jobs at night. He went from working construction to running his own screen-printing business to getting a degree in finance and real estate all on his own. And if that weren’t enough of an accomplishment at age 21, he sold cars on the side to make enough money to get in front of a judge and request guardianship of his younger brother who was still in the foster care system.

Anthony interned with a CRE company right out of college and his favorite part was that he was always learning and that he got out what he put in. He continued to collect contacts and business cards from everyone he met and made an impressive database. But his big breakthrough came when he was taken under the wing of the a real mentor.

After a number of years in the industry and with the help of his mentor, Anthony was ready to build his own team. Things were rocky, but soon he met someone from his alma mater who was passionate about CRE. He was so impressed by their drive he brought them aboard and he has been growing his team ever since.

Another big stride forward came when Anthony went from a boutique-style firm to a national one. Much like all the other opportunities in his life he was determined to leverage this to his advantage and continue to build that database of connections. He planned one of his famous trips and met with each top producer along the west coast from Seattle to San Diego with the intention of making genuine connections and solidifying himself as the go-to agent in his market.

It’s no surprise to anyone who has met Anthony and knows of his drive to succeed but after just one full year in his new brokerage, he hit number one in 2019. He feels more motivated today as he is responsible for team members, his wife, and his new child. He credits his motivation and success to rigorous goal-setting, his ability to truly value time, and his passion for teaching others. 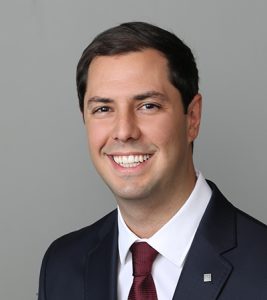 is a Senior Vice President with Cushman & Wakefield ChaneyBrooks, the oldest commercial real estate firm in Hawaii. Anthony is a top producer in the commercial real estate broker-age community and has earned several accolades for his success. With over 12 years of experience, he specializes in the leasing and sale of industrial properties. Born and raised on Oahu, Anthony studied Finance with a focus on Real Estate at the University of Hawaii at Manoa Shidler College of Business. He was recently was awarded his Society of Indus-trial And Office Realtors (SIOR) designation, a professional symbol of the highest level of knowledge, production and ethics in the real estate industry.